Getting Married in Khon Kaen 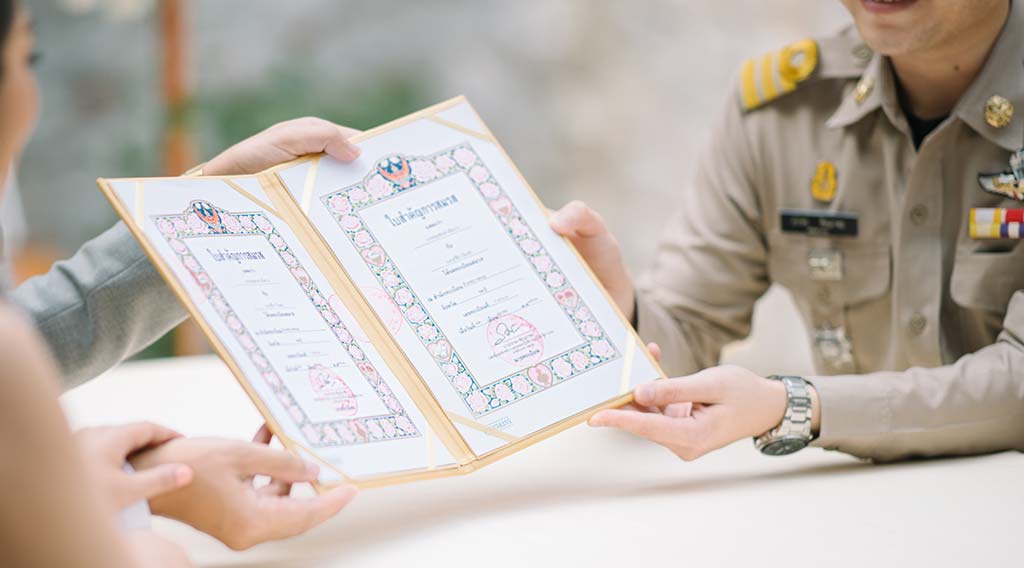 In either case, the steps to register for a marriage in Thailand are surprisingly easy.  For one thing, marriage registration can take place at any of the district offices in Thailand, from eight in the morning until three in the afternoon on any day during the work week. First, this is a discussion about the requirements and procedures necessary for two foreigners to marry in Thailand.  The first thing you need is both passports, as well as proof that both of you are single.  You will further need a notarized statement of such from the embassy in your country.  If either potential spouse has ever been married then you need to present either a proof of divorce or a death certificate, depending on which cause ended the marriage.  Thai authorities require a statutory statement, at a charge of 25 baht from each person.  The embassy generally charges a notarization fee as well.

All documents need to be presented in both Thai and English, and having it translated may require a further fee; it is generally about 700 baht.  The time frame for registering a marriage between two foreigners is not very long at all.  Normally you should give it about four working days, at least, because you must have been in Thailand at least three days prior to being allowed to get married there; this also allows time for processing. If you are a European or an American wishing to marry a Thai national, the procedure is a bit different. There are several more requirements, which are as follows:

•   you must have your passport;
•   you must present your salary statement or something comparable, so long as it provides proof of income;
•   a divorce or death certificate, if you were ever married before;
•   there must be proof that your home country has received notice of your marriage;
•   references from two people in your native country, who are not members of your family;
•   if applicable, the names and ages of your children.

Generally, it only takes two working days to receive a certificate for registration of marriage from an Embassy when you marry a Thai national.  There is a fee, charged for seeking the Embassy’s services.  It is possible to forward all documents beforehand, as that will save time. Following obtainment of the certificate, you must take it to the Thai Ministry of Foreign Affairs, so that it can be authenticated as a real document.  It takes another few days for the certificate to be verified, after which you can register the marriage at any District Office, which will also require a small fee.

It is important to note that in Thailand, a marriage is only legal if it has been performed in a District Office.  This is true for marriages involving two foreigners and marriages involving a foreigner and a Thai national.  That is not to say that you cannot have the marriage that you want simply because marriages performed elsewhere are not considered legal in Thailand.  You can have the formal ceremony wherever you like and an official ceremony in the District Office.

There really are not any negatives to marrying in Thailand, except for the fact that marriages are only considered legal if they take place in a District Office.  As mentioned, it is fairly easy to take care of that.  You should however try to do it during the right time of you, so you will not risk any drastic weather impeding your ceremony. In contrast, the positive aspects of marrying in Thailand are many.  Because the cost of living is so low, you can have a really lavish wedding that will still be extremely inexpensive.  As well, there is a wide array of breathtaking locations where you can stage your wedding, and then you also have the option of honeymooning in Thailand.